Neonatal SARS-CoV-2 infection: is this a vertical transmission?

Neonatal COVID-19, its manifestations and transmission, remains unclear. As the pandemic continues more evidence will emerge but so far, vertical transmission of COVID-19 is rare with just a few reports in the literature.1 We share our experience of managing a preterm newborn with COVID-19 in our neonatal intensive care unit (NICU) where the vertical route seems the most likely mode of transmission.

A preterm female neonate was born at 31 weeks’ gestation to a 26-year-old mother. The pregnancy was followed with routine antenatal scans and screening. The 28-week scan showed a normal amniotic fluid volume and no concerns with lung development. There was no history of prolonged rupture of membrane. Three days prior to the delivery, the woman became unwell with fever, body aches and malaise and she presented to the hospital with tachycardia and low saturations. She needed oxygen through a face mask to maintain saturations. Her SARS-CoV-2 viral ribonucleic acid (RNA) reverse transcription polymerase chain reaction (RT-PCR) test was positive.

The obstetric team decided to deliver the baby by emergency caesarean section due to reduced fetal movement, pathological cardiotocography and the unwell clinical state of the mother. Because of the urgency, there was not time to administer antenatal corticosteroids to accelerate fetal lung maturity; tocolysis was inappropriate. The neonatal team was present for delivery in full personal protective equipment (PPE) as per local guidelines.

A preterm infant was born in good condition but soon needed assistance with inflation and ventilation breaths due to a slow heart rate and poor respiratory drive. The newborn infant continued to need support with 50% oxygen at 10 minutes of age to maintain saturation within the acceptable range (>90%). In view of prematurity and respiratory distress, the infant was transferred to the NICU’s isolation room and commenced on continuous positive airway pressure (CPAP) ventilation. The preterm infant was intubated and received surfactant at one hour of age due to persistently increasing oxygen requirement and worsening respiratory acidosis. A chest X-ray (FIGURE 1) showed ground-glass opacification throughout the lungs. The infant required mechanical ventilation for 10 hours, non-invasive CPAP/high flow respiratory support for seven days, and further remained on low flow oxygen until day 10 of life. Sepsis investigations, as per National Institute for Health and Care Excellence and local guidance, were not suggestive of infection so antibiotics were stopped at 36 hours. 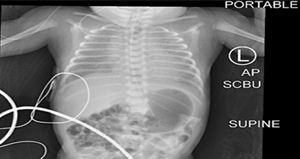 The newborn infant satisfied the British Association of Perinatal Medicine’s (BAPM) criteria for being managed as a suspected COVID-19 patient needing respiratory support. As part of screening, the infant had oropharyngeal swabs taken on days 3, 5, 7 and 10. The swabs tested positive for SARS-CoV-2 RNA by RT-PCR on days 3, 7 and 10.

The newly born baby was separated from the mother at birth. Neither parent could visit as the mother was in an isolation room on labour ward and the father had to isolate as being a contact trace. The parents had access to the baby through video calls until the 14 days of isolation passed, as per national and local policies. Throughout her care in the NICU, the infant remained in the isolation room in an incubator and staff wore full PPE during handling. The infant received screened donor breast milk during admission. The baby was discharged on day 14 of life and follow-up was arranged for six weeks later.

The risk of preterm labour and fetal distress in mothers with severe viral infections such as influenza and SARS-CoV-2 is high.2,3 The incidence of preterm labour in COVID-19 positive pregnant women from the Wuhan meta-analysis report was 23%.4

Diagnosis of neonatal SARS-CoV-2 infection in a symptomatic exposed newborn is established with a positive nasopharyngeal swab for SARS-CoV-2 RNA by RT-PCR or by SARS-CoV-2 specific IgM antibody detection in the blood.5 A meta-analysis of 74 reports identified 176 cases of neonatal SARS-CoV-2 infection where the authors demonstrated that vertical transmission occurred in 9% of the cases. One-third of the infections were acquired intrapartum; two-thirds acquired congenitally. To establish the timing of vertical transmission (in utero, intrapartum and/or early postnatal), it would be necessary to carefully evaluate the type and timing of samples.6 The presence of SARS-CoV-2 genome in vaginal swabs and breast milk raises the possibility of transmission to the baby either during birth (intrapartum route) or the early postnatal period. In addition, the presence of viral genome in umbilical cord blood increases the likelihood for placental transmission and makes in utero transmission plausible.7

Our case was managed as a suspected case of COVID-19 as the infant was symptomatic with respiratory distress. Umbilical cord blood was not tested for SARS-CoV-2 but the infant had nasal and oropharyngeal swabs that were positive on days 3, 7 and 10.

X-ray findings, are commonly seen in preterm newborns with surfactant deficient lung disease (SDLD). Our team considered whether SARS-CoV-2 infection had any role to play here. The X-ray picture of typical COVID-19 in children shows bilateral peripheral, subpleural ground-glass opacities and consolidation.8 To our knowledge, there is not enough literature available to delineate the X-ray changes typical of SARS-CoV-2 pneumonia in newborn infants. A chest X-ray in one case report of neonatal COVID-19 demonstrated bilateral linear opacities. It also showed consolidation and pneumothorax in the right upper lobe.9 A second case report showed a ground-glass appearance on day 1 of life; this case went on to have a chest computed tomography scan on day 14 due to increased oxygen requirement and this showed lower lobe consolidation.10 Our case had a very similar ground-glass appearance from day 1 but did not need further imaging as the condition improved by the 10th day.

Conclusion and points for consideration

We present a symptomatic case of an infant delivered by caesarean section, in isolation from the moment of birth, with the presence of SARS-CoV-2 RNA in multiple oropharyngeal swabs and a confirmed symptomatic SARS-CoV-2 infected mother. This leads us to postulate that vertical transmission is possible and is the most likely route here.

The clinical and radiological features of the preterm infant support a diagnosis of SDLD but raise the possibility that SARS-CoV-2 contributed to the manifestations: