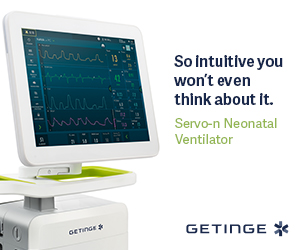 A preterm neonate of 36 weeks’ gestation was born via emergency lower segment caesarean section, requiring respiratory support soon after birth. She was hypotonic from birth and was found to have a large gastric bubble and a raised right hemidiaphragm on X-ray. She reached full feeds through a nasogastric tube on day 3 of life but later developed severe gastro-oesophageal reflux with pulmonary aspiration. What is the likely diagnosis?

A preterm baby was born at 36+3 weeks’ gestation weighing 2.17kg. She was born by caesarean section following concerns about intrauterine growth restriction and polyhydramnios.

She was born pale and floppy with no respiratory effort and a heart rate of less than 100 beats/min. Resuscitation was initiated and she responded to inflation and ventilation breaths but was subsequently intubated due to poor respiratory effort and increased oxygen requirement. The post-intubation plain radiograph of the chest showed a raised right hemidiaphragm (FIGURE 1). 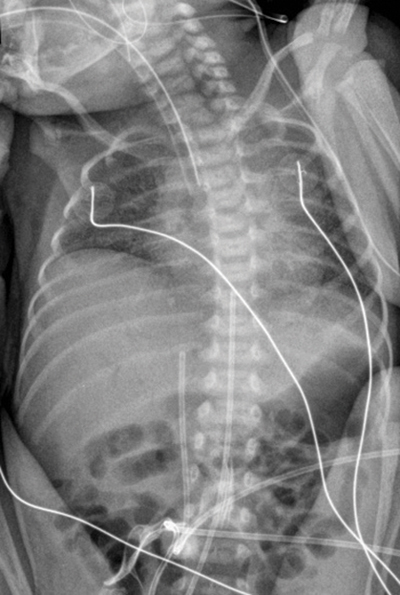 FIGURE 1 The chest and abdominal radiograph shows a slightly rotated film. The endotracheal tube is just at the level of the carina and was pulled back. The umbilical arterial catheter is at T10 and the umbilical venous catheter is low-lying (T12). The right hemidiaphragm is elevated compared to the left. There is no pneumothorax or focal consolidation. The cardiac shadow appears normal. The NGT on the first pass can be seen coiled up in the pharynx (on the second pass, the large bore NGT could be seen in the stomach in the follow-up radiograph).

Detailed examination on the neonatal unit revealed a hypotonic neonate with no antigravity movements, absent suck, gag and deep tendon reflexes, and an expressionless face. She required mechanical ventilation for 24 hours and was extubated to non-invasive ventilation (NIV).

Nasogastric tube (NGT) feeding was initiated on day 1 with full feeds achieved by day 3, after which she suffered severe gastro-oesophageal reflux with pulmonary aspiration. A nasojejunal feeding tube (NJT) was then inserted, but with difficulty and only after several attempts. Chest and abdominal radiography performed to check the position of the NJT, showed coiling of the tube in the stomach, a significantly large gastric bubble and a persistently raised right hemidiaphragm (FIGURES 2 and 3).

She was later found to have a condition that had also been diagnosed in her mother and five-year-old sibling. 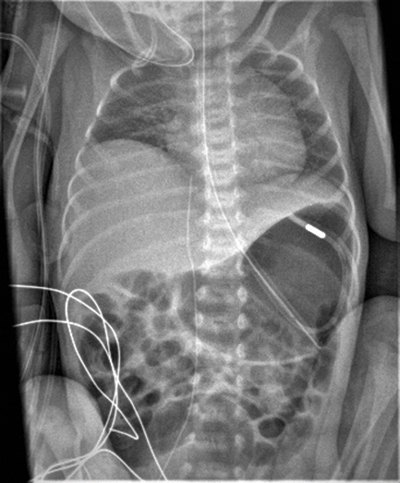 FIGURE 2 The chest and abdominal radiograph shows a persistent raised right hemidiaphragm, the dilated stomach and a NJT coiled up in the stomach. A peripherally inserted central catheter line is visible in a good position. 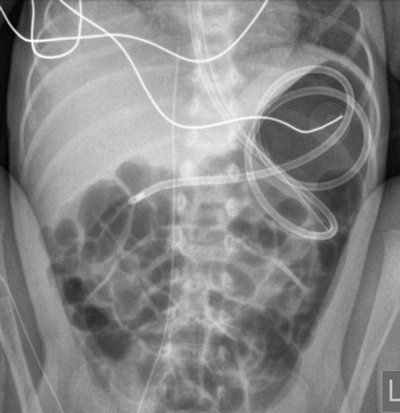 FIGURE 3 An abdominal radiograph showing coiling of the NJT within the stomach. The right dome of the diaphragm is elevated compared to the left.

Question 1. What is the likely diagnosis?

Question 2. What is the mode of inheritance?

Question 3. Which of the following features is not a common finding in the neonatal period?

Question 4. Which of the following treatment options have been found to be beneficial in managing the gastrointestinal complications associated with this condition?

What is the likely diagnosis?

Following a review of the history and detailed clinical examination, a presumptive diagnosis of congenital myotonic dystrophy (CMD) was made based on the findings of hypotonia, hyporeflexia and positive family history in mother and an older sibling. Genetic testing in our baby confirmed a diagnosis of myotonic dystrophy type 1.

CMD is caused by repeat expansion in the dystrophia myotonia protein kinase (DMPK) gene located on chromosome 19q13.3. Severity of the disease correlates with the number of repeats in the affected individual.1 It is inherited in an autosomal dominant manner which means that there is a 50% chance that each child will inherit the disease. The estimated incidence of CMD is about 1:47,619 and mortality in the neonatal period is about 40%.1

Common findings in the neonatal period

Other clinical signs that may be present in the neonatal period include:

Respiratory difficulties are usually responsible for the high mortality in the newborn period and the pattern of respiratory distress has been attributed to three different mechanisms including pulmonary hypoplasia, arrest in muscle maturation and poor respiratory drive secondary to central respiratory depression.2

The finding of an elevated hemidiaphragm in babies with CMD has been described in the literature. Manuel Roig et al noted in their study that four out of 18 patients with CMD had an elevated diaphragm.3 Rutherford et al also studied 14 patients with CMD and found that 43% had a raised hemidiaphragm with a right-sided preponderance, as in our patient. This may be accounted for by findings on autopsy, which include hypoplasia and necrosis of the diaphragm with over-stretching from intrabdominal pressure and moulding by the right lobe of the liver to account for this sign. This may contribute to significant respiratory distress and an overall prolonged need for assisted ventilation.4

Constant pooling of secretions was another major problem we encountered in the management of our patient, often requiring regular suctioning. The inability of our patient to clear secretions contributed to episodes of upper airway obstruction characterised by recurrent episodes of apnoea, multiple desaturations with or without bradycardias, and increased oxygen requirement.

The use of hyoscine transdermal patches was beneficial in our patient as evidenced by the reduced need for suctioning from up to three times in an hour to once every 4-6 hours, with increased tolerance to NIV and less clinical desaturations.5

Patients with CMD may require intubation and ventilation for respiratory support. In such an instance, avoidance of muscle relaxants is recommended. Depolarising muscle relaxants, such as succinylcholine (suxamethonium), should be avoided in patients with CMD as these can cause hyperkalaemia and fasciculations. Some reports have described a ‘myotonic response’ after suxamethonium in CMD patients, which may result in difficulty with ventilating and intubating these patients. Shorter and intermediate acting non-depolarising agents, such as atracurium, have been used without the need for reversal agents and have been deemed safe.6,7 Our patient was intubated in theatre under an emergency situation without the need for pre-intubation drugs.

Gastrointestinal problems encountered during the neonatal period include poor suck and swallow, feeding difficulties, gastro-oesophageal reflux disease (GORD), gastroparesis and up to a third of patients may develop constipation and irregular bowel habits. Our patient had signs of severe reflux complicated by pulmonary aspiration.8

CMD also affects the smooth muscle of the gastrointestinal tract, which can manifest as diminished peristalsis, gastric retention, and persistent dilatation, all of which may further increase the risk for GORD and aspiration.9

The technical difficulty we experienced in passing a NJT as evidenced by its unusual coiling in the stomach (FIGURE 3), may be explained by the associated decreased gastric peristalsis causing delayed emptying with associated dilatation.

The NJT was eventually passed successfully under radiological guidance. We did not opt for the use of feed thickeners as first line in GORD treatment in our patient. Some evidence suggests caution in the use of thickeners in the management of reflux in CMD as there have been reports of bezoar formation.10

Our baby is currently stable on overnight NIV (via a NIPPY 4 ventilator, Breas Medical Ltd), on pressures of 10/4 with a backup rate of 25 breaths/min. She has also had fundoplication procedure performed and a percutaneous endoscopic jejunostomy tube (PEJ) inserted by the interventional radiologist. She is now on continuous PEJ feeds at a rate of 30mL/hour over 20 hours.

CMD is a rare variation of myotonic dystrophy type 1, which can present in the neonatal period; an awareness of common neonatal symptoms is essential. Respiratory and gastrointestinal complications can be very problematic in the neonatal period and invariably account for increased mortality if not carefully managed. A multidisciplinary approach is necessary and we recommend early involvement of specialist teams.

Consent for publication was obtained from the mother of the patient.

Question 1: The correct answer is (c)

The clinical findings of hypotonia, hyporeflexia, an expression-less face with positive family history of the same genetic condition in mother and an older sibling makes the diagnosis of congenital myotonic dystrophy (CMD) more likely. CMD should not be confused with congenital myopathy or congenital muscular dystrophy.

Question 2: The correct answer is (b)

Question 3: The correct answer is (d)

Gastrointestinal problems encountered during the neonatal period include GORD, gastroparesis and up to a third of patients may develop constipation and irregular bowel habits. Edrophonium

or Tensilon test is a bed-side test in patients with suspected myasthenia gravis and can aid in its diagnosis; it has no role in CMD.

Feed thickeners should be used with caution in the management of reflux in CMD as there have been reports of bezoar formation: a solid mass of indigestible material that can cause gastrointestinal obstruction. Percutaneous endoscopic jejunal (PEJ) tube insertion, fundoplication and gastrostomy tube insertion are all procedures that can be carried out to manage severe GORD in these patients and enhance growth and development.